I can not work in Webflow.... its to slow

The last months Webflow is very, very, very slow in The Netherlands…
i can almost not work in the designer… am I the only one?

It’s very slow today for me too. In France…
Designer and Settings.

I’m not sure if it’s been the last month, but today has been incredibly slow.

Publishing is taking 90+ seconds and sometimes never publishes. The Designer has failed to load twice, requiring a refresh.

For me too, in Netherlands. I tried creating some CMS items and it takes forever… Also cannot click through tabs in project settings. What’s going on?

I’m now getting this error while loading the Dashboard.

Sigh. Webflow Status remains forever oblivious, so there’s no reason to trust it. I’ll send in the first ticket, if no one else has already.

If you can, would be great to notify them. I had some work I needed to get done today so this is quite inconvenient!

It’s been horrendous for me over the last few months too. Always crashing. And this is on a very high spec PC. Almost ready to give up and go back to building by hand.

Yep I’ve experienced full on outages that never showed in the status dashboard, don’t trust it.

When i work 8:00 europe time, its all ok… but when its 13:00 and America is waking up, its become really, really slow. Its a capacity problem for sure… So just let us hear that you are working on it @webflow

It’s gotten somewhat better in the past 5 minutes (Designer is loading pretty quickly now) , but it’s been on/off for a while now, so I’m not particularly optimistic yet. EDIT: Nope, Designer is fully dead now. HTTP Error 504 Gateway Timeouts…

And, same, Jasondark. The Designer has had its share of bugs for a while: today is old bugs + network issues.

I came here to make another bug report from work last night and, well, not even getting the Designer to load half the time.

Ticket has been sent, linking them here. Will update, but ideally they’d just 1) post to status.webflow.com, 2) add a forum post, and 3) put up a pop-up somewhere (I expected the Dashboard, but if even the Dashboard is having issues? That’s the whole point of having a status page, sigh.

On the time zones: that seems right. The whole US has come online on the first workday of the week: 9AM on the West Coast was 3 minutes ago. But, again…why not just update status.webflow.com? Intermittent connections are a bug, too.

I take it back: now the Designer is fully dead. I am going to work on other stuff. Another massive failure of communication, Webflow: 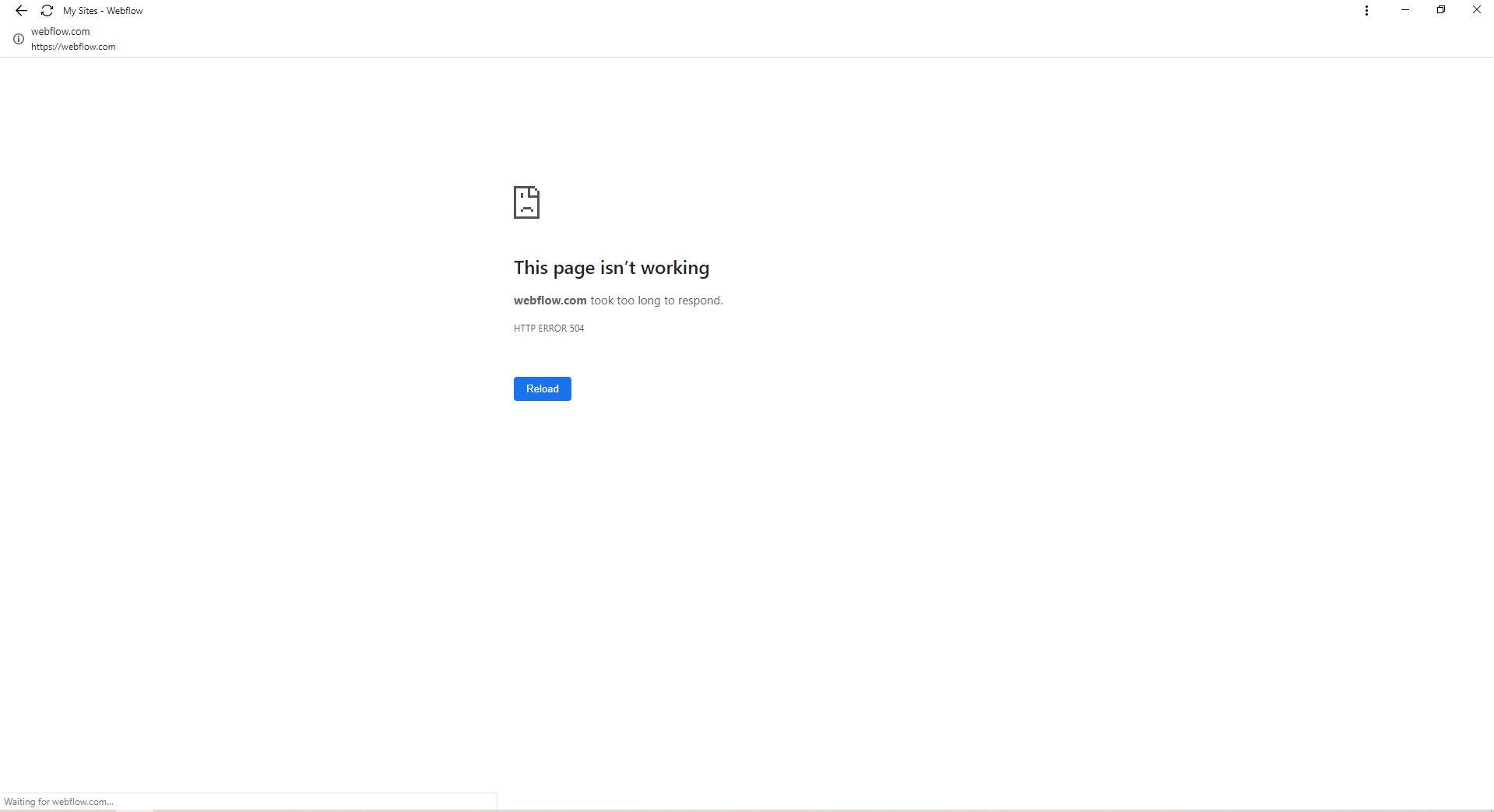 I’m unfortunately not surprised by the complete lack of information.

Of course services are going to go down. Of course network bugs happen. Of course downtime is expected. What’s not acceptable is Webflow’s lack of information & accountability. It’s a rough & busy week/month/quarter for many, but Webflow’s communication was poor to begin with.

We are aware of some reports of the designer being slow and we have a team looking into it as we speak. I will post an update here to keep you in the loop.

Please feel free to send reports or possibly related issues to support@webflow.com or in this thread, where we can monitor theyour reports.

Thank you for your patience.

We asked for better communication in October 2019:

Webflow should at least add a pop-up / modal to the Designer after logging in to inform users of the problem, if not actually updating its official Webflow Status page. We wasted ~60 minutes between different machines, browsers, internet providers, even double-checking the image files themselves, etc. I’ve just now seen this thread and it’s a little disturbing that this infrastructure failure wasn’t noted, anywhere, by Webflow. Webflow is very eager to inform customers with a pop-up modal Webf…

We asked for better communication in February 2020:

In other news, the Webflow Status page once again gives zero information: https://status.webflow.com/ [image] I subscribed to Webflow status updates, but there was no need.

@magicmark, why are these issues not covered in Webflow Status? Are these not worthy of even minor incident notes?

We trust you can fix these issues, of course; what’s harder to find trust in is Webflow’s own monitoring & transparency with its userbase.

Thank you for receiving the tickets. We’re excited to get back to work…

Thanks for the update here.

Candidly though, and I’m not just trying to stir up trouble here but rather just have a real dialogue and positive feedback:

Perhaps the verbiage would be better if you stated “We are aware of the designer being slow”, rather than “of some reports”.

How come we’re experiencing these issues when the Webflow status says all is working ok?

This is exactly what I thought… what sense does that status dashboard make if it doesn’t reflect issues?

I’m having all kinds of error messages within the designer all day… saving and publishing takes forever… my only explanation is the high traffic here in Europe, since so many people are home now.

@TG2 I will report this back to the team. I honestly can’t say why or when the status page is updated as I don’t know, but I will raise this point.

Clearly this is having a problem globally.

@Bradpaulp We always have multiple reports, and they don’t always happen globally. For instance, none of my sites are affected, and neither are some other users. We have to look into things, reproduce the issues before we can fix them.

Perhaps the verbiage would be better if you stated “We are aware of the designer being slow”, rather than “of some reports”.

My message says: We are aware of some reports of the designer being slow and we have a team looking into it as we speak

I agree with this.

I have more trust in a product that says ‘Oops XYZ broke, we’re on it’.